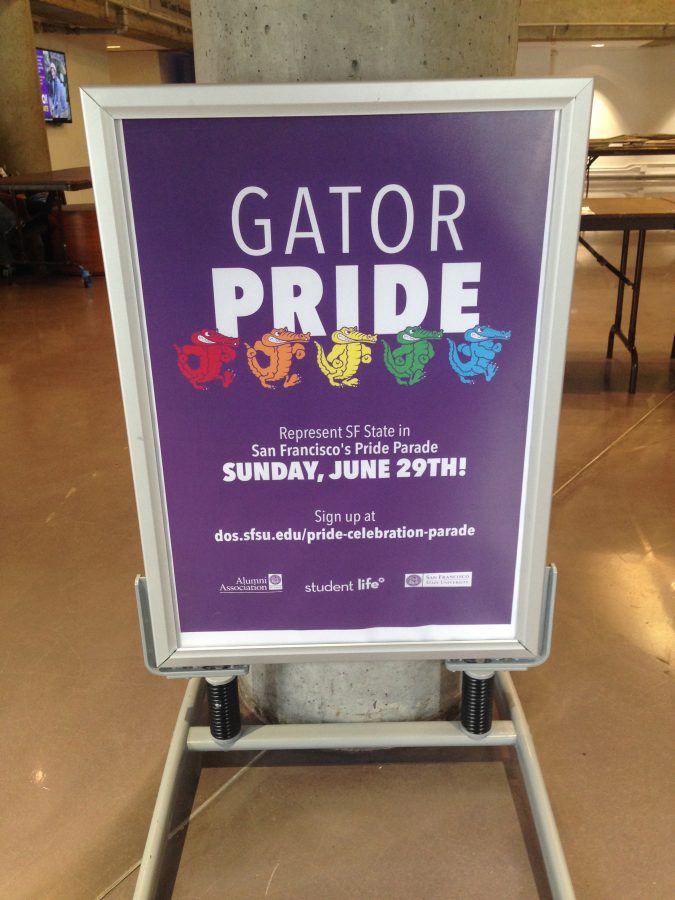 Gator Pride posters like the one shown here can be found around campus, all advertising the coming LGBT Pride march in San Francisco.

In the city of San Francisco, summertime often involves days spent at Fisherman’s Wharf and concerts in Golden Gate Park, but at the city’s Civic Center in downtown San Francisco, something else very colorful is going on June 28 and 29. The SF Pride parade brings together members of the LGBT (lesbian, gay, bisexual, transgender) community together to have a good time. This year, San Francisco State University will be participating in the festivities with a float along the parade route. This will be the 44th year of the Pride Parade, and the third year of SFSU’s participation. Director of Campus Recreation, Pam Su, who has been planning SFSU’s involvement in the Pride Parade said, “We’re pretty excited.” Su said there will be a truck trailer float decorated in gold and purple to clearly identify SFSU. She wants “Gator pride” to clearly be represented. Along with the purple and gold colors, the rainbow flag, usually flown in the Castro District, will wave along the parade route and a DJ will ride on the back of the float playing lively music. Su hopes 100 people, students or not, will march alongside the decked-out purple and gold float on Sunday. People interested in participating with SFSU along the parade route can sign up hear: http://www.sfsu.edu/~pride/. The deadline to register is Tuesday. Ryan Jones, Assistant Director of Parents and Early Engagement Programs at SF State, responded to SF State’s participation in the Pride Parade: